Here is a recap of some miscellaneous discussions and topics from the past few weeks:


Health: I called and chaired a meeting with reps of the Ministry of Health, Heartland Health Region, and the Kindersley and District Health and Wellness Foundation to ensure Kindersley has the level of health services that are required. A broad range of topics was covered, and the theme was growth and capacity. We came up with a bit of a plan that has been used in another jurisdiction and we will see if it can be used here. Our MLA, Bill Boyd, is also helping us in this as well.


Governance: During our regular governance coaching session before the December Council meeting, we, as Council, realized that though we may have a Carver model, we are not a Carver Council. We follow many of the policies, have changed some, and will be changing more policies but we do not strictly adhere to the Carver model. We are developing the Kindersley Governance system that is unique to Kindersley’s situation.


By-election: The deadline for nominations is January 2, 2014. If you are considering whether to put your name forward, let me encourage you: This is a terrific time to be a Councillor. We are growing, and as a result, we have some tough but exciting decisions to make. We have spent the past year developing some new policies and we will be looking at passing and implementing these new policies in the new  year. Council is planning a retreat on March 8th and 9th to help the new Councillor get up to speed, do some future planning, and work on some governance issues. We are also trying to see if George Cuff, a well-respected municipal expert, will meet with us during our retreat. If you are considering allowing your name to stand for the election and want to meet, please give me a call and I’ll be more than happy to meet with you.


Budget: As we come to the end of 2013, numbers indicate that the human resource (HR) portion of the operations budget will be approximately 1% over budget. This 1% includes all overtime as well. Considering the HR expenses related to the landfill fire in October, this is a good result.


Happy New Year! I hope the changes you envision for yourself in the next year are realized.


Please write or phone if you would like me to discuss a particular topic. If you have any questions or comments, drop me a line at the town office or email me at mayorenns-wind@kindersley.ca. You can also check out my blog at http://mayorjohn.blogspot.ca/. I appreciate your feedback.


Have a good holiday season!
Posted by Unknown at 00:00 No comments:

I want to wish you a Merry Christmas!

Posting to this blog has slowed due to illness, I am now on my second round of medication, and the Christmas season.

May the grace of Jesus be with you.
Posted by Unknown at 22:52 No comments:

Hi, I am still sick and have not been able to write any posts. I do apologize and will resume posting when I am better and caught up at work.
Posted by Unknown at 07:56 No comments:

Email ThisBlogThis!Share to TwitterShare to FacebookShare to Pinterest
Labels: PERSONAL

Moment with the Mayor: Merry Christmas


Christmas is a season during which we look back at what has happened over the past year and look forward to what can be in the next. Indulge me as I look forward and reflect on some themes that have been on my mind this season.


It is my hope that we can continue to make Kindersley beautiful. There are many residents who take great pride in making their yards beautiful, and last year we had some beautiful floral displays downtown as well. I hope we can capture more of that beauty in 2014 and have it on display on Main Street, around our neighbourhoods, and at our various facilities and insitutions. I also hope that there will be beauty in each of our lives to inspire us toward a vibrant future.


Justice is important for all of us. I hope that we gain more affordable housing and that we continue to develop the facilities and programs that help suffering residents make healthy decisions, help the unfortunate, and bring healing and fairness. I hope that we are just as we build and grow Kindersley together so all can participate in the creation of new wealth.


Communities are irrational; we live with people who are very much like and unlike us. But relationships are key to a healthy community. We have to live together as best we can to bring out the better angel of our natures. Living in community requires understanding and flexibility. My hope is that with dynamic and peaceful relationships among us we can all flourish.


Merry Christmas! And may your holidays and celebrations be joyous and peaceful.


Please write or phone if you would like me to discuss a particular topic. If you have any questions or comments, drop me a line at the town office or email me at mayorenns-wind@kindersley.ca. You can also check out my blog at http://mayorjohn.blogspot.ca/. I appreciate your feedback.


Have a good holiday season!
Posted by Unknown at 00:00 No comments:

I have been wrestling with a cold for 3 weeks and have work deadlines to meet as well. As a result I may not have a new post until early next week.
Posted by Unknown at 04:50 No comments:

Here is my report for November and December. I was down for a week with a bad cold and not productive. In fact I am in the 3rd week of being sick; ugh.

When discussing inflation the reference point is usually the Consumer Price Index (CPI) which is a basket of goods consumers purchase. The CPI is an indicator of the changes in consumer prices experienced by Canadians. The change in prices is obtained by comparing through time the cost of a fixed basket of goods purchased by consumers in a particular year. Because the basket of goods only contains products that have not changed or are the equivalent in quantity and quality, the CPI represents pure price movements.

In recent years the CPI has been around 1.5% - 3%. From October 2012 to October 2013 the CPI was 1.5%. One more thing you should know is that since 2002 prices have increased almost 27%. So why do I mention it? Construction prices have been sky rocketing. The CU Plex in North Battleford doubled in price as they went from fundraising to final product. For infrastructure repairs we have heard stories where quotes on projects came in 10%-20% higher than expected; we experienced that as well a couple of years ago. Recently Bernie was told that the new normal for a tax increase to address infrastructure issues is 4%; I almost choked. I want to see our property taxes hold the line to the broader inflation rate.

One more thing: as I reviewed a draft of another city's budget I am encouraged. We have a healthy budget to serve Kindersley including addressing our infrastructure deficit (asset cost recovery). I am also looking forward to the commercial, industrial, and residential growth hoping there will be a net benefit on property tax rates.
Posted by Unknown at 21:52 No comments:

This is just a quick post about the blog and I will need your feedback.
What I need from you is some feedback about the blog so it can better help you understand Kindersley, what is happening and why. Email me your comments or suggestions.

Email ThisBlogThis!Share to TwitterShare to FacebookShare to Pinterest
Labels: MAYORAL

Adventures at the WCEC

I suppose the breakdowns over the weekend at the West Central Events Centre are not really adventures, but the ride in dealing with them seems like it. Here is what has happened over the last few days:
Each of these incidents was unrelated to the others.
Unfortunately the ramifications have been challenging: 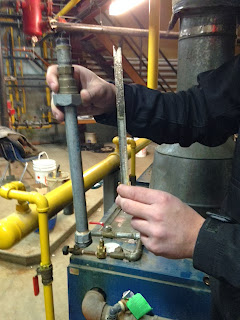 Administration has been methodical in dealing with the issues identifying why they happened and developing the action steps necessary to ensure the incidents are unlikely to happen again. Some of the action steps are quick wins while others will take time and money to implement.

The contractors, including our insurer SGI, have been quick to respond to the needs of the Event Centre and the Klippers. For the record: our insurance covers this and the Klippers are covered as well. The Town's deductible for this incident is $5,000.

If you have any questions please speak with Jeni at the WCEC.

Here are some photos of the work areas that have been effected by the weather.

The area near where the water pipe burst. 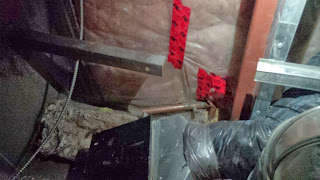 Another picture of the room where the water pipe burst 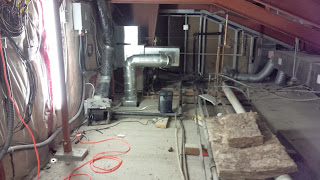 Most of the Klipper dressing room with the stalls and flooring stripped out. Crews were on site around 10:00 this morning. 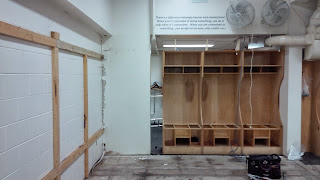 An inside look at one of the maintenance rooms. This part is above the equipment with the frozen air pipe. 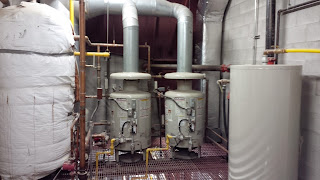 There you go: a brief tour of the operations end of the rink. Sorry, no Zamboni room this time.